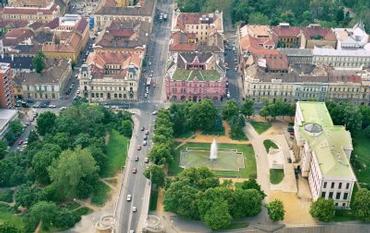 In the XX. At the beginning of the 20th century, the Makai Market was held on Roosevelt Square, which was replaced by a park in the thirties.

Later, in the middle of the square, there was a huge pool, where a fountain was built in 1966. The color of the well-kept flower beds changes every season, and the park is surrounded by a yellow pearl walkway.