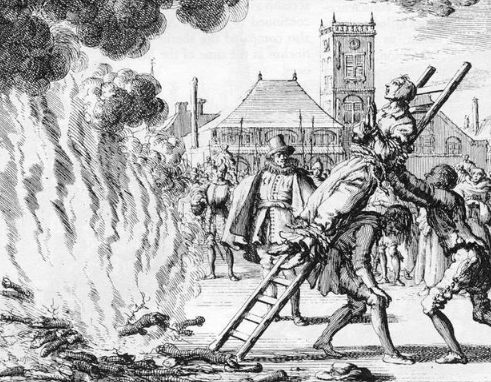 There is a place in Szeged where we can recall the old legends of the witches of Szeged. It is the Witches’ Island, that received its name after the execution of 12 people. How did these tragic events start?

At the beginning of the 1700s Szeged was characterized with exceptional unrest. After the liberation from the Turkish occupation, the number of tramps and beggars increased, and there were more and more conflicts in the city, then in the 1720s the region was affected by a severe drought. There was no rainfall to help the crops grow and the granaries were empty. Then, following the long drought, the city was buffeted by a huge storm. Priests believed that all these disasters were the works of the devil and the witches living among the inhabitants of Szeged, who made a pact with the devil. This is how the witch hunts in Szeged started.

There are several ways to identify a witch, but the most common one was the ’swimming test’, where the accused witches were bound and tossed into the water to see if they would sink or float. According to the logic, an innocent person would sink, but a witch would simply float on the surface. However, even the innocent people who drowned were burned at the stake, saying: fire purifies the soul.

Midwives were in the biggest danger, as they were present and helped at childbirth, and when a ‘miracle’ or an unexpected tragedy happened, they were accused of witchcraft. Anna Nagy Kökény, a key figure of the witch trials in Szeged, was also a midwife. She had already had a trial in 1726. At that time the swimming test in the River Maros at Makó was used as evidence against her, where she was found guilty, though she was not executed, but banished. Two years later, at the time of the big drought and hail, it was known that some old women, including Anna Nagy Kökény, practiced enchantment with the sacred wafer in order to heal. She had many enemies by nature, whose sins she revealed, so the jails of the city were quickly full with convicts. Finally, on 23 July 1728, 12 from the men and women accused of witchcraft were burned at the stake at the Witches’ Island. That was the most famous witch trial in Szeged.

Following the trial, several people were sentenced to death for witchcraft. It was ended by the edicts of Maria Theresa who banned the witch trials in the Austro-Hungarian Monarchy in 1755.