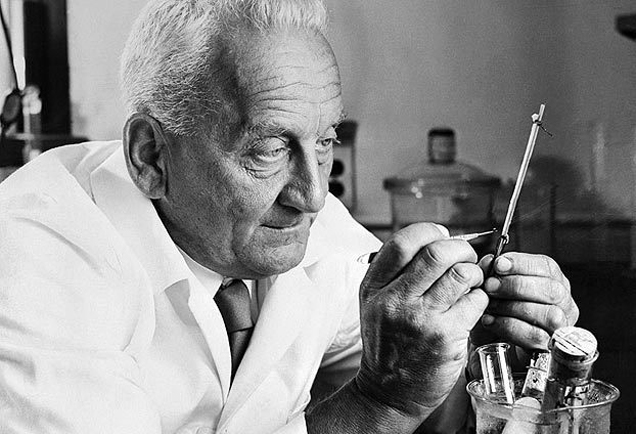 Albert Szent-Györgyi (1893-1986) is one of the most widely acclaimed Hungarian Nobel-prize winning scientists. At the height of his career, between 1930 and 1944, he lived and worked at the university in Szeged.

Szent-Györgyi in the 1920s worked in research centres in Bratislava, Prague, Berlin, Hamburg, Leiden, Groningen, London and the United States. He received his PhD in chemistry at the University of Cambridge. He returned to Hungary in 1930 to lead the new Department of Medical Chemistry in Szeged, where he created a modern biochemistry school with the support of the Rockefeller Foundation. He was not only an outstanding scientist but was also a role model for his students. He was a pacifist and a philosopher, he loved sports and adventure. He encouraged his students to think, debate and to engage in out-of-school activities.

Szent-Györgyi is credited with first isolating vitamin C and discovering the components and reactions of the citric acid cycle. An important step in the discovery process was his experiment with szegedi paprika, a local product of the town. He discovered that a paprika fruit contained about 5 to 6 times more vitamin C than a lemon. In 1937 he was awarded with the Nobel Prize in Physiology or Medicine ‘for his discoveries in connection with the biological combustion process with special reference to vitamin C and the catalysis of fumaric acid’. A copy of the Nobel diploma hangs in the biochemistry institute at Dom Square.

Pacifist by nature, Szent-Györgyi was active in the Hungarian Resistance during the Second World War. In 1943 he was on a lecture tour in Istanbul where he was instructed to lead secret talks with English representatives of the Allied Forces on the possibility of Hungary leaving the German alliance. The action was unsuccessful and as a result Szent-Györgyi was the most wanted men on the Szeged list of Nazi Gestapo in 1944. He escaped from imprisonment by gaining political asylum from Swedish King Gustaf V. In 1947 he emigrated to the Unites States where he settled down in Woods Hole Massachusetts and he continued his work in cancer research as head of the Marine Biological Laboratory until his death in 1986.