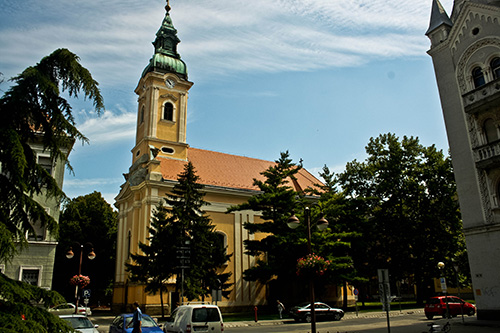 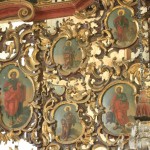 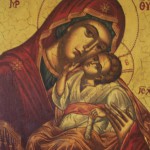 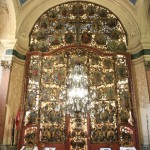 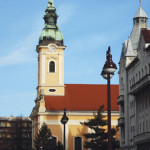 The Serbian Orthodox Church stands on the northern side of the Dóm square, close to the bank of the River Tisza. The Serbian community of Szeged boasts a history of more than 500 years. They arrived in Szeged in the Middle Ages, moving northward because of the invasion of the Ottoman Empire.
It had its first wooden church built in the area of the old castle int he early 16th century. That church was destroyed by fire during the liberation of Szeged from Turkish conquest in 1686. During the great migration of the Serbs, a new church was built on the site of today’s church, consecrated in 1701.
In the 18th and 19th century they played an important role in the commercial life of the city and the region. Their recognition is shown by the fact that originally they had the right to build a church in the area within the castle walls.

The present, single-nave, very beautiful Baroque-style church was consecrated in 1778 and dedicated to Bishop St. Nicholas of Myra. The layout of its interior is in accordance with the orthodox requirements and its central element is a unique iconostasis richly decorated with gold, made in the Rococo style in 1761. This unique iconostasis is the only surviving work of the famous icon painter Jovan Popovic. The top of the rococo-style icon wall with openwork lace and richly patterned gold icons was created by an unknown artist. The not so well known Slovak Jan Hodina made a fresco on the ceiling depicting “Creating the World”. The Egyptian holy image of the Black Madonna, made by Coptic Christians, is one of the most interesting works of art in the church, in which Virgin Mary and Jesus Christ were immortalized as black-skinned.

Prior arrangement is necessary.