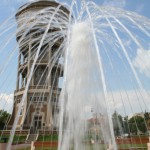 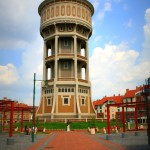 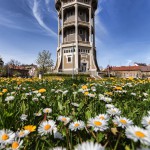 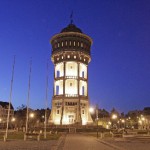 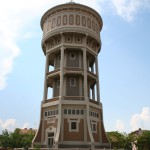 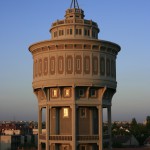 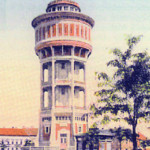 A nicely created park and a curiosity in the history of industry, the country’s first water tower made of reinforced concrete await visitors in Saint Steven Square. The tower, which can hold 1004,8 m3of water, was designed by Szilárd Zielinski. It was built in 1904 and has been performing its original function ever since. The whole tower was made of concrete, including the front door and 54.9 m high pole holding the flag. Inside the tower renovated in 2006 there is a Foucault pendulum demonstrating the rotation of the Earth. Having climbed up its many stairs, tourists can get a magnificent panorama from the top of the tower and see colourful soda water bottles, as well as an exhibition on the history of physics. Around the tower we can find the busts of seven renowned architects who made their mark transforming the cityscape.

Szeged, the ‘city of palaces’, can take pride in a genuine architectural curiosity, one of the oldest industrial monuments of reinforced concrete, in the Water Tower, which is commonly called the Old Lady. With its simple, inventive structure and puritan plainness, it is an excellent example of the engineering inventiveness. Because of more than a century since its construction and the countless novelties of the 20th century’s architecture, the tower does not evoke such an astonishing newness that this spectacular building represented in the contemporary Szeged. The modern architectural endeavours of the turn of the century and the marks of the geometric branch of the Art Nouveau lend a splendid look to the Water Tower that is still functional.

The original function of the building  is unchanged, and nowadays still works as a water tower. It was originally built with a lookout level which can be visited in summers and occasionally on Open Monument Days. There are two permanent exhibitions in the tower: downstairs, the collection of soda-water production, on the seventh floor, the exhibition on the history of physics. On the second floor, the original blueprints and plans of the reconstruction as well as photos of the renewed tower can be seen.

Admission:
Adult: 610 HUF, student, pensioner: 400 HUF, children under 6 for free.
Groups with more than 10 people can visit the tower with prior arrangement at +36-62/558-844 (Szegedi Vízmû ZRT).
Tickets for groups after arrangement can be bought at the Tourinform Office (Dugonics tér 2. )